I've been talking about QA and test automation but haven't really gone into much detail about what exactly I want to do. Hopefully, I've made a sufficiently strong case for a task automation system vs. a strict test automation system already but I'm open to other thoughts. Please keep in mind that most of this is really early and there are still parts which still need to be planned out.

If you think that all of this sounds a lot like AutoQA, you'd be right. From this high level overview, a lot of this does describe AutoQA - the major differences are in the details of task execution and how tightly coupled all the compoents are to eachother and to parts of the Fedora infrastructure.

The basic idea is modeled somewhat after continuous integration systems where a scheduler listens for signals from fedmsg and schedules tasks based on the content of those messages. 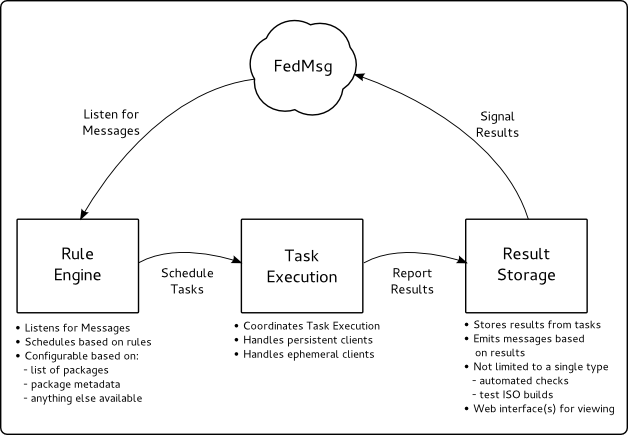 Looks simple, right? Well, as in many cases - the devil is really in the details. Any of those three boxes is a non-trivial project in itself

The scheduler, or rules engine, has a bunch of if-then rules that are run every time an appropriate message from fedmsg is received. These rules can describe situations like the following examples:

The possibilities are pretty much endless but I think that covers enough territory to get a few ideas rolling.

Task execution could be thought of as the center of taskbot. Once a task request comes in from the scheduler, this component is responsible for properly setting up and delegating the execution of said task.

The process by which a task is executed would depend on the exact details of the task but the general process would be:

This is a bit vague since I'm trying to encompass several divergent use cases with the same description but I plan to describe the process in more detail with later articles.

The following execution paradigms would (eventually) be supported:

Result storage is purposely vague because it can cover a number of things from the ResultsDB which AutoQA is currently using to other result stores that hold firehose data or something simple to hold the contents of a test ISO.

In my mind, the important thing here is that results storage isn't limited to one format or one backend. The task execution engine has its' own method for storing the task result which is much less specialized and is likely independent of the more specialized task's result.

Instead of continuing to talk about taskbot in the completely abstract sense, I've been working on a rough proof of concept system. 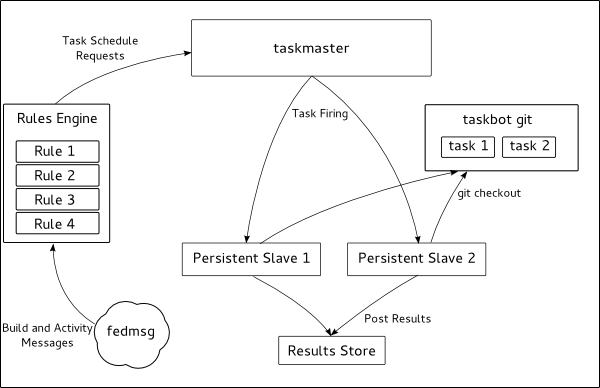 I've generally found that while some planning is required to have a project end well, after a certain point the best way to find the limitations in something is to implement a proof-of-concept system. With that in mind, I'm going to be moving the proof-of-concept system I've started somewhere a bit more public than running on my personal systems behind a firewall.

What I'd like to eventually see in the proof-of-concept is the following:

This proof-of-concept system so far is built using buildbot as the task execution engine, some of the simpler tests from AutoQA, a simple results storage mechanism and fedmsg-hub as the method for scheduling tests.

I think that the next steps are a little bit more investigation and improving the proof-of-concept system and some discussion about where all of this might go.

With few exceptions, I see the implementation details as being relatively flexible. In particular, I suspect that the choice of buildbot vs. autotest is going to be interesting - both systems have their own advantages and disadvantages and no matter what we choose, we'll need to start contributing code upstream. Neither one is going to fulfill 100% of our needs out of the box but I've found both upstream projects to be friendly and as long as we work with them as we develop code, I imagine we would be able to upstream the changes which make sense.

The choice isn't limited to just those two, beaker and (parts of) HTCondor have been suggested as alternatives. I have my reasons for suspecting that neither of those would be a good fit for taskbot but I'm happy to be wrong if I've misunderstood something.

I will write updates as I have them, feel free to comment here or on qa-devel