I've gotten several questions in the last few weeks about Taskotron and how it compares to Jenkins. With the rate at which I'm getting that I'm getting these questions, it's a topic well worth exploring.

Unfortunately, "How does Taskotron compare to Jenkins?" is a difficult question to answer because it's not a very valid comparison. The question is similar to comparing the apple press (used to make juice) in one factory with the entire apple juice factory across the street - they're not totally dissimilar but they definitely aren't the same thing either.

Taskotron is a modular system designed to make automation easier for a semi-arbitrary set of people without forcing anyone to use the entirety of a single stack (after setup, libtaskotron doesn't care what the rest of the job is written in so long as it returns a form of output it understands).

To really understand what Taskotron is, let's take a look at how it fits into Fedora's infrastructure and build process. 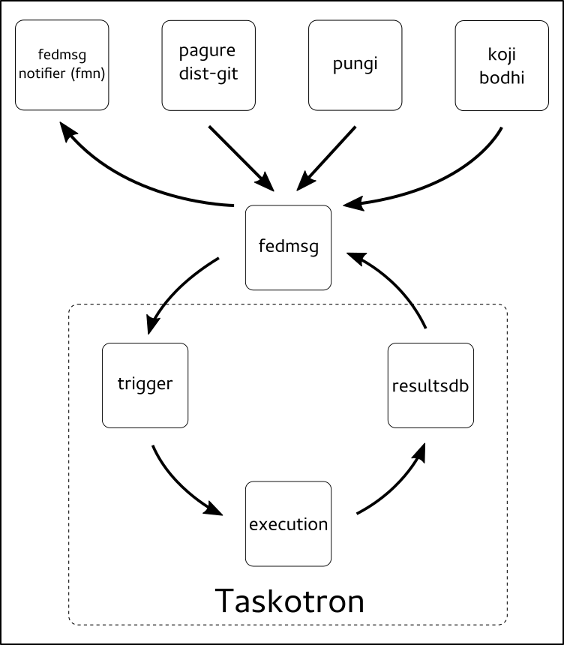 Pretty much anything going into or coming out of Fedora's Taskotron instance is in the form of fedmsgs because that's what everything in Fedora uses but there isn't much more code needed if one wanted to move that to AMQP or another messaging protocol.

Looking a bit closer at the "Taskotron" box in that diagram, the "trigger", "execution" and "results" stages can be decomposed a little farther.

I do want to call attention to a few things in this diagram:

As stated on their homepage, Jenkins is "The leading open source automation server" and while differences between the two are numerous, plain upstream Jenkins fits roughly in the same box as Buildbot from the previous diagram.

How are Taskotron and Jenkins Similar?

When we're talking about plain, upstream Jenkins, the short answer is "they aren't very similar at all". That being said, if you change the question a bit to "How does Taskotron compare to my Jenkins instance which has this custom config and these plugins which may or may not be commonly available?" then there's a bit more potential for similarity but that's a very difficult question to answer without knowing which plugins are being used and how the Jenkins master is configured.

This scratches the surface of the current state of Automation in Fedora from a QA perspective but I hope that I've been able to explain why a straight comparison between Jenkins and Taskotron isn't a good place to start because they're really not the same thing.

There are plenty of more topics to cover on Taskotron, where we're going and the decisions that we've made so far and I do plan to start covering those topics in more regular posts here. That being said, I do want to end with some of the design goals for Taskotron to give a little more context to some of the reasoning which has affected our decisions so far: